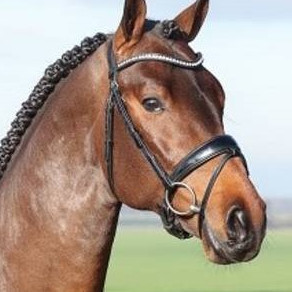 About & Performance - Apple is a charming stallion, with a lot of potential. As a foal Apple was top of his game as a Champion foal, in the final ring of the German foal championship in Lienen and commanded a top auction price. He has matured into an impressive young stallion, showing a lot of quality. . In the free jumping class, at his licensing in Verden, he showed fantastic ability and technique, coupled with a calm and positive attitude.

In 2022  Apple knew how to impress under the saddle and successfully completed his sport test with a final score of 8.24 for jumping, acording to the judge's comment, Apple beamed with "a loose, elastic canter" and "a good handling at the jump", "with a consistently good manner".

Sire - Amazon is one of the few licensed sons of the Warendorf state stud stallion A la Carte, who won the Grand Prix under Marcus Ehning as champion stallion of the main licensing in North Rhine-Westphalia. In the second generation Arpeggio ensures a valuable line-breeding to the highly valued Holsteiner Acord II and is also part of the Westphalian silverware. In the third generation, Amazon has another Warendorf state sire, Potsdam NRW, who was highly successful in the course with Heinrich-Wilhelm "Kaiser" Johannsmann for years. As a seven-year-old, the wealthy Amazon is in the Sprehe stud farm with many placements in 1.35 m tests before jumping into the advanced class. His half-sister Quintana is highly successful in up to 1.60 m jumping.

Damline - Callida  is one of the few daughters of the high quality Cascadello II, whose daughter Camisa Negra became Federal Champion of six-year-old cross-country horses in 2020. The third generation Holstein stallion Corofino II was also highly placed in World Cup competitions. His granddam Uliana P also produced Bente P, who is currently victorious at 1.40m in the USA. Apple's third mother Lexika also produced a horse that is currently 1.45 m placed with Quanta 113. The most famous stallions of this family include the brothers Acord I to III and Acobat I to III. In terms of sport, a whole group of first-class course horses appeared, above all Meredith Michaels-Beerbaum's Olympic horse Bella Donna.