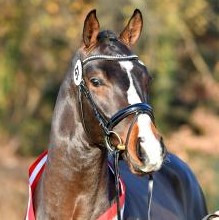 About & Performance - Anyone who was able to experience this stallion at the licensing in Münster-Handorf has no doubt about deserving he was of the aware of Champion Stallion of 2020! Ability, motivation, manner, attitude, flexibility, elasticity and demeanour - he simply has it all and was able to impressively prove this on all the days of the Westphalian main licensing.

Sire - As a three-year-old, Arezzo was champion of his performance test, scoring 9s for his scope, reflexes and talent. At the World Championship for Young Horses in Lanaken, Arezzo jumped clear in all rounds and then finished 4th in the finals. Arezzo won the Dutch national five-year-old championship in 2010,  and then had an outstanding 7-year-old career: 4th in the Queen's Cup at Mechelen, 3rd at Saint Cecile and Liege, 4th at Oliva, 6th at Verbiers and 6th twice at Twente. He won at CSI5* level in s'Hertogenbosch, and has since gone on to have a top grand prix career with further wins at Helsinki, Olympia, Vestfold, s'Hertogenbosch and Poznan under Dutch team rider Jur Vrieling.

Damline - His grandmother brought the internationally successful show jumpers Canto from Cantos and Fenth from Alicante and his great-grandmother brought the three full siblings from Burggraaf: Kuno II, Naburo and Melrik. Further down the line there is the noble sire Contender who has 127 licensed sons and 498 offspring competing in sport; 25 of his licensed sons also jumped at grand prix. Among them are Montender (German Champion, double bronze medallist at the Athens Olympic Games and double gold medallist at the 2005 European Championships), Colore, Catwalk van de Helle, Chellano Z and Con Air.