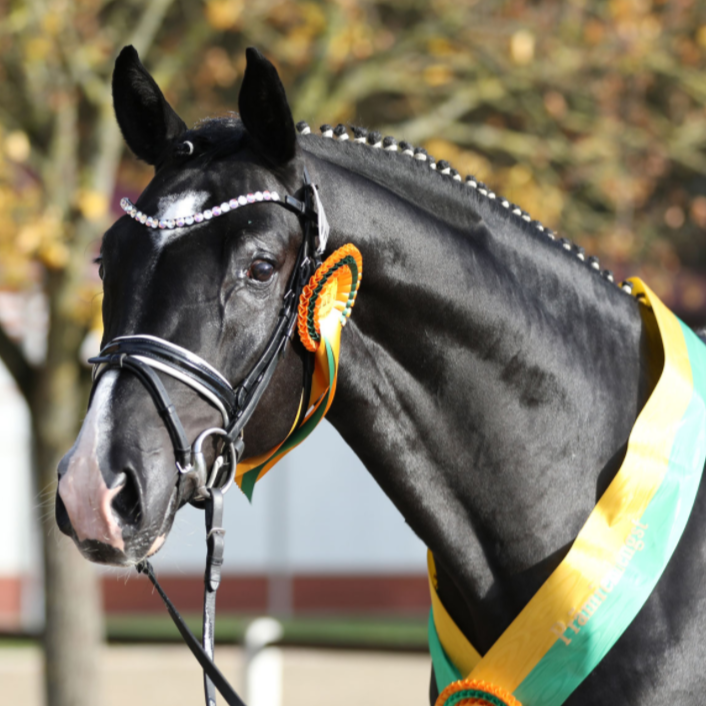 About & Performance - FS Bloomberg was the only premium stallion to leave the licensing area in Zweibrücken in 2019. In addition to his extremely noble appearance, as you would expect from a modern dressage stallion, he was particularly convincing with his movement potential. Therefore, FS Bloomberg was able to set clear exclamation marks in its first season in terms of sport. In addition to victories in riding horse tests and participation in the finals at the Bundeschampionat, he was the clear winner of the stallion performance test in Ermelo and received approval for KWPN. FS Bloomberg's interior, character, willingness to perform and above all his rideability stood out both in the 14-day test in Adelheidsdorf and at the stallion performance test in Ermelo, which the examination committees rewarded with top marks of  9:00 to 9:75!

Sire - Bon Coeur was a premium stallion in Verden 2014, and won his 30-day test in Schlieckau in a very strong field with total points of 9.1 for his gaits. During the 30-day test, he was rewarded with the maximum of 10.0 several times. Bon Coeur has been awarded 9.0 multiple times for rideability during qualifiers to the Bundeshampionat. He was also champion in Hannover 2016 and was, both as a 3-year and 4-year-old Reserve-Bundeschampion in Warendorf. He was awarded the Weltmeyer Prize 2017, from the Hanoverian Association for his magnificent year in the sport. In September 2018, Bon Coeur made his first start in Sweden. He had an impressive 93% in the 6-year-old test, with a 10 for future prospects. In January 2020 Bon Coeur made a start at international small tour with +71% in Wellington, Florida.  Bon Coeur can already look back on 40 licensed sons and over 25 state and premium mares . In addition, the sporting success up to Intermediare I has an impact on the international stage. It almost goes without saying that his offspring are also successful in sport according to their age.

Damline - His damline shines with the stallions Don Index , Rohdiamant and De Niro. All of them firmly established in dressage horse breeding who have made a name for themselves both through their own performance and through their offspring. Dam-sire Don Index was the champion of the 2010 Stallion Performance Testing at Adelheidsdorf, wining first place with an overall score of 135.46.  Within this score his dressage score was 144.76, meriting 1st place; and his jumping score was 96.01, meriting 15th place.