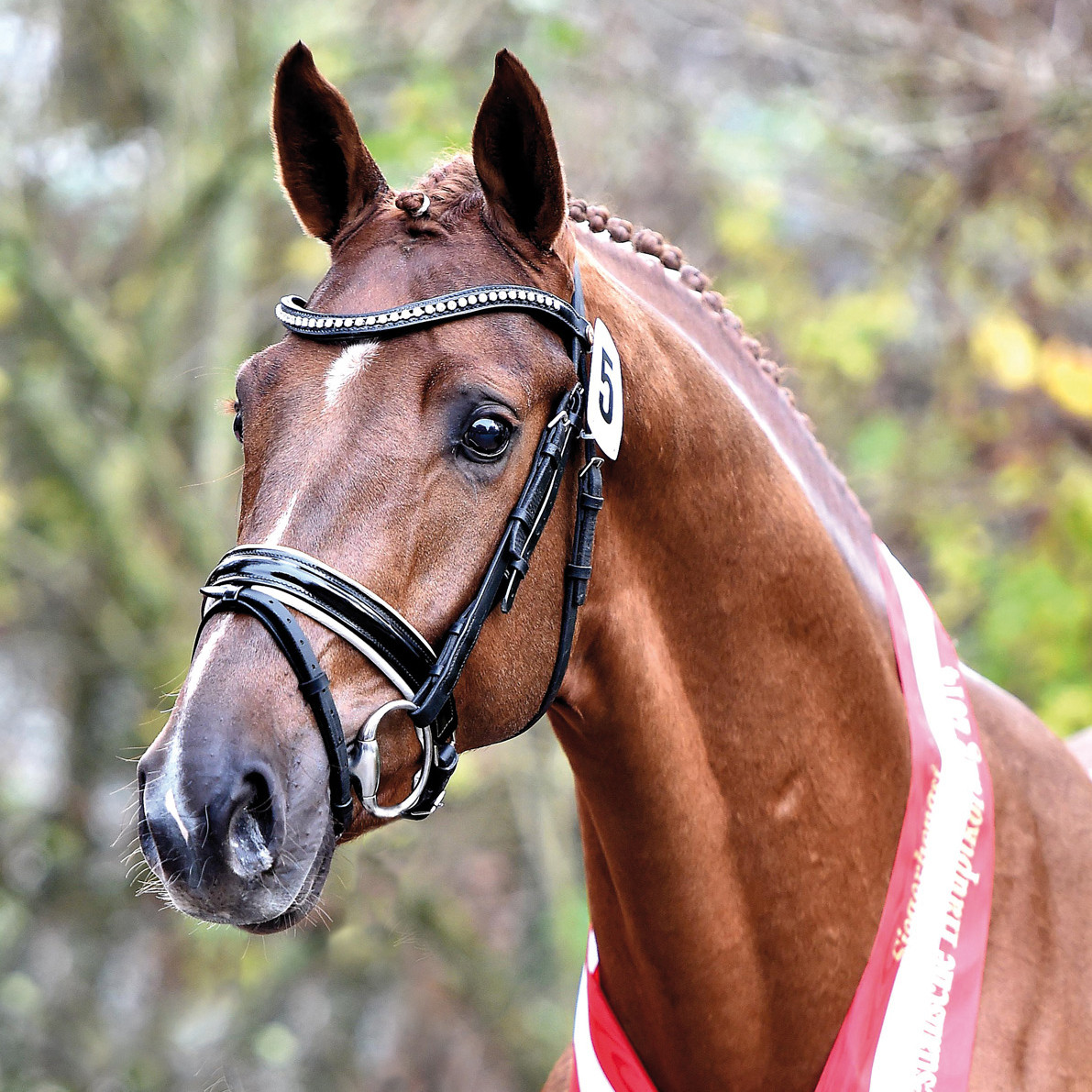 About - A champion from top to toe. Borsalino enthuses at all points - type, charisma, interior and quality of movement. A large stallion with a good foundation and outstanding basic gaits, coming from strong hindquarters with high elasticity and always in rhythm.

Performance and Progeny- In 2015 Borsalino recieved the best final score of the dressage stallions at his 30 day performance test. In 2017 he finished his sports horse test with the final score of 8.87 and 9.5 points for rideability. In 2018 two of his sons from his first year were licensed. 7 foals were sold at the autumnal auction for an average price of 28,600 Euros. In 2019 Barcelona by Borsalino-Danone I-Friendship (breeder: Michael Schenk, Römsted) became vice championesse at the German National Young Horse Championships in Warendorf. Bellisima (Borsalino-Distelzar-De Niro) and Bond Girl (Borsalino-De Niro-Weltmeyer) were awarded premium at the Herward-von-der Decken Show and were sold for top prices at the auction in Medingen.

Sire - British-bred father Boston was champion of his British Warmblood Society licensing, and finished a very good 30-day performance test in Neustadt-Dosse. Boston's father Jazz leading the world ranking of dressage horses for many years and was KWPN Stallion of the Year in 2011. He won many international grands prix tests, and is the sire of multiple international grand prix horses, his most famous probably being Jerich Parzival, who ruled international dressage with his rider Adelinde Cornelissen for years, including winning individual silver and team bronze at the London 2012 Olympics. Boston's dam combines the jumping lines of Flemmingh and Furioso II. Boston sadly died as just a 6-year-old after intestinal illness. He was based with Isabell Werth at the time, and in his three seasons at stud was able to produce nine licensed sons and three State Premium mares.

Damline - Borsalino's dam line received many important premiums and has provided numerous sports horses. Damsire Fidermark was victorious at grand prix, and promoted the line of Florestan internationally. The grandmother provided Rostropowitsch, who was successful at grand prix with rider Christoph Koschel. Through Coriograf B and Landadel, this elite dam line carries the excellent Holstein blood that was positively influencing the Holstein and Oldenburg breeding for years. Especially noteworthy is outstanding Furioso II, who formed the modern sports horse in many ways and who is represented in Borsalino's blood three times