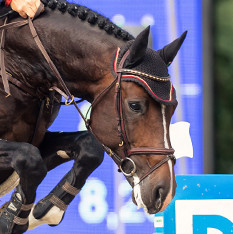 About - Casalido is a charming and competitive jumper and a carbon copy of his sire, Casall. His fantastic canter and incredible jumping technique, as well as his natural ability over the fences, have already made him a very popular breeding stallion. He shows fast reflexes, as well as great manners at the jump.

Performance - At his first show in May 2015, he won a 1.10m young horse class as a four-year-old. In 2016, he qualified for the Bundeschampionat with Hendrik and Gerd Sosath multiple times. Gerd won three qualifications in a row with him and was runner-up in the small final in Warendorf. In 2019, Casalido placed several times in jumping classes up to 1.45m and was successful in the international Youngster Tour at CSI Kronenberg, Hamburger Derby, CSI Verden and CSI Paderborn. Casalido placed on the second position in the overall standings for eight-year-olds of the Equiline Youngster Cup. In 2016, Casalido qualified for the "Bundeschampionat" with Hendrik and Gerd multiple times.

Sire - As of January 2017, sire Casall ASK is still winning grands prix aged 18 with Rolf-Goran Bengtsson, who has ridden him since 2005. As a six-year-old, he was third in the Bundeschampionat and Schleswig-Holstein Champion, but it is his international career that has been exceptional. He was the overall winner of the Longines Global Champions Tour (GCT) in 2016, winning not only the final in Doha but also the Paris and Valkensward legs. The previous season, he won the Rome and London GCT grands prix, and was third in the GCT rankings at the end of the season; throughout his career, he has won or finished on the podium in a GCT grand prix 22 times. He has won over €1.8 million on the Global Champion Tour alone. He was also 4th individually at both the 2014 World Equestrian Games and the 2013 European Championships, where he also won team bronze. His soundness and reliability have been remarkable - he has never missed a season in his 13-year career, and he is ranked fourth on the WBFSH Sire Rankings for 2016.

Damline - Casalido's damline is very strong, and is proven for producing top-quality competition horses. His dam Kyara is a full sister to the dam of Meredith Michaels-Beerbaum's great mare Bella Donna, who topped the prize-money rankings in Germany in 2013. Kyara is also a full sister to the two approved stallions Charisma I and II. In addition to Casalido, she produced Limonchello NT, who is successful at international grand prix with Ludger Beerbaum and Christian Kukuk.

The damsire, Calido l, is considered one of the best Holsteiner stallions of recent years, and his offspring have won more than €3million in prize money. More than 70 Calido I sons have been licensed, and nearly 100 are jumping at grand prix. In addition to type, jumping ability and technique, Calido I is also known for his rideability.

Three generations back is Calypso II, who stood stud in Holstein for several years but than put his stamp on the Hanoverian breeding.

The Calypso I-daughter Ribecka, a "nearly full-sister" of Casalido's second dam Verona I, produced the top sires Acord I, II and III. She is grand-damof the full brothers Acobat I, II and III through her daughter Tschiba (by Capitol I). This line has produced more than 50 licensed stallions. Among them are Aktionär, Avero, Bavaria Luchs, Burggraf, Catango Z, Fra Diavolo, Freeman, Lady’s King, San Riant, and Silverstone. Also part of the family are the international jumper Lord Arico and the 2001 Bundeschampion Christopher 7.

Progeny - Casalido's foals have already been impressive; the Oldenburg Verband awarded him third in the Hauptprämie award, given to the stallion who produces the best first crop of foals. His foals are well-built, good height and type, and with very appealing heads.