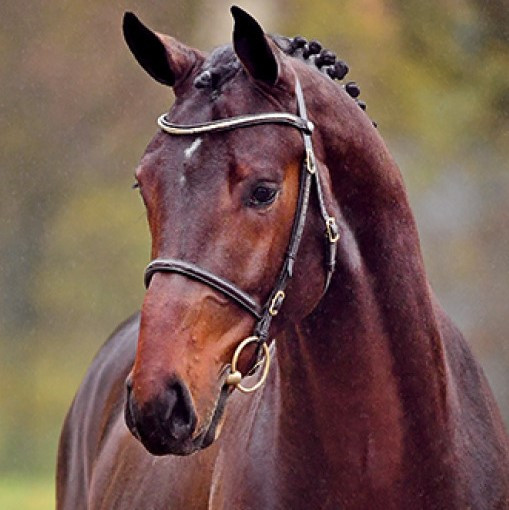 
Terms - €950 +VAT for unlimited attempts with chilled semen on one named mare in one breeding season, if the mare is certified not in foal by the end of September €600 +VAT will be refunded.

About & Performance - Charaktervoll has been one of the most conspicuous colts of the 2019 pre-selection in Holstein, his performance has always been characterized by his powerful movement through the knee. He has three impressive and correct gaits with a well-constructed frame, a strong top-line and correct legs. His strong hind leg and back not only enable him to move with the desired up-hill tendency but also provide him with exceptional jumping potential. His excellent canter is a basic requirement for an optimum jumping process. His strength allows for the desired push at take-off in combination with a very good technique and great carefulness, and particularly impressive hind leg technique.

Sire - Comme Il Faut was second in the World Championship for five-year-olds at Lanaken in 2010. From the beginning, he stallion demonstrated his outstanding qualities on the international stage. At the start of his career he jumped in young horse classes, but after only one season he was jumping at grand prix. In 2013 and 2014, he achieved good results in 7 & 8-year-old classes, then two seconds in 2014 at Paderborn CSI3*, and in the grand prix at Dortmund CSI3*. In 2015 he achieved 3rd in 1.60m CSIO5* at Rotterdam, 3rd in the Rome GCT grand prix, plus placings in three World Cup qualifiers; 4th in Oslo, 6th in Helsinki and 9th in London. 2016 was his best season yet - he won the Vienna GCT and the Madrid World Cup qualifier, plus the grands prix at Paderborn, München and Gross-Viegeln.

Damline - Charaktervoll’s damline is influenced by an array of successful international stallions, proven and reliable dams and an internationally successful Holsteiner mare family. Contendro I, Capitol and Caletto II, are high-profile international sport horse sires, all of them, with highly successful offspring up to Olympic level. Dam, second dam, and third dam have all produced show jumping offspring with S level achievements.