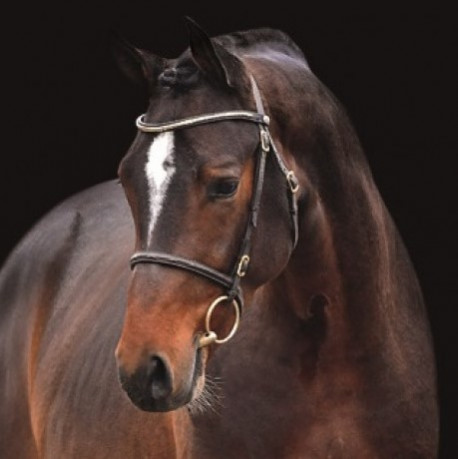 
Terms -  €950 +VAT for unlimited attempts with chilled semen on one named mare in one breeding season, if the mare is certified not in foal by the end of September €500 +VAT will be refunded.

About & Performance - In his age group, this Caretino grandson was doubtless among those stallions with the most expressive type. Showing his well-constructed top line, he is also a particularly attractive eye-catcher thanks to his dark coat and distinctive marking. His basic gaits are of extraordinary quality as he always displays an up-hill tendency with good rhythm and active hind leg. Chezarro’s jumping is in accord with his breeding, as he is very careful and demonstrates great intelligence and extraordinary quality as well as most impressive ability.

Sire -  The international star Casall won his first Grand Prix under Rolf Goran Bengstsson in 2008, from there the pair went on to place all of the worlds premier showjumping competitions. In 2010 Casall won the Grand Prix in Rotterdam, the following year they went on to place first in Hamburg and Monte Carlo legs of the Global Champions Tour and the World Cup in Lyon. In 2012 he made his debut in the 2012 London Olympics, in 2013 he was second at the Grand Prix in Ommen and Zurich, fourth individually in the European Championships in Herning. 2014 in the Global Champions Tour he competed 6 out of the 7 jump offs won in Chantilly and DOha and placed second overall.  Casall is listed on 3rd position on the WBFSH sire ranking already at the age of 19.

Damline - The pedigree offers a wealth of interesting information on Chezarro’s genetic background. His dam Siance is by Conteur, a stallion closely related to important sire Contendro I. His second dam Ciance by Athlet Z introduces the highly successful international blood of the top showjumping sires Alme and Gotthard into the bloodline. His fourth dam, a full sister to exceptional stallion Lord, is of particular interest, as Fiance contributes plenty of first rate TB genes to Chezarro’s genetic make-up: the TB stallions Ladykiller and Cottage Son guarantee performance attitude and hardiness.