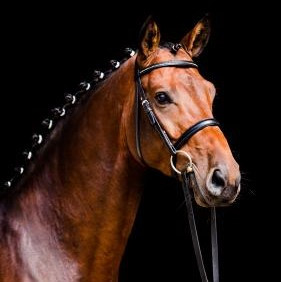 About & Performance - Colugar is a horse that embodies sheer talent and excellence, he has already proven this on several occasions. He successfully passed his stallion performance test in 2017 and can already show victories in young horse jumping classes as well as placements up to M ** level. The multiple qualification for the Bundeschampionat underlines his achievements.

Sire - Codex One Z began his international career under Karl Brocks to 4th place at the World Championships for Young Horses in Lanaken as a 7-year-old. In 2011 Christian Ahlmann took over the reins and at rocket speed they transformed into one of the most triumphant combinations in the history of show jumping. Nations Cups, World Cups, European Championships, World Equestrian Games and the Olympic Games... Codex One Z knows every competition ground and championship!

Damline - Dam-sire Lex Lugar also collected numerous victories and placements at international level under Carsten-Otto Nagel, such as in Aachen and Munich. The two celebrated their greatest success in 2010 with their victory in the German Jumping Derby in Hamburg, where they were able to place themselves at the top several times in the years that followed.