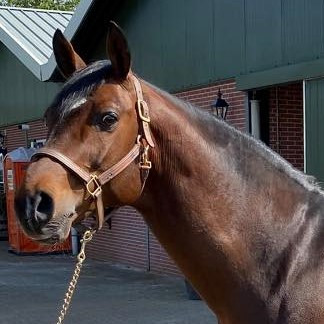 
Terms - €1250 +VAT for unlimited attempts with chilled or frozen semen on one named mare in one breeding season, if the mare is scanned not in foal by the end of September €900 +VAT will be refunded.

About - Czardas is an accomplished Grand Prix stallion who is now available for breeding with frozen semen, he has made his name in sport at top competitions having jumped 5* level with, among others, Mclain Ward, Kirsten Coe and the current owner, the Canadian Karina Frederiks. With a large amount of blood running through the damline this stallion has been of interest of the eventing community. With limited offspring on the ground due to the focus on his sporting career, many are looking forward to what this stallion produces.

Performance - With rider Karina Frederiks Czardas placed in an enormous amount of international Grand Prix competitions across the world they made their mark by becoming 4th in the CSI3* Knokke in 2016, 3rd in the CSI3* Roeser, 4th in the CSI4* W-Del-Mar in 2015, 4th at the Calgary Spruce Meadows and many more.

Sire - Contendro won a premium at the 1999 Holstein licensing, and was champion of his performance test in 2000. He was placed in the 4yr old National Championships, and qualified for the 5yr old Bundeschampionat, but since then his breeding career has meant that he performs rarely. His full brother Contendro II has jumped up to grand prix and is also a licensed stallion. - Contendro has produced offspring competing at the highest level in all three disciplines; he has 47 grand prix showjumping offspring, and CCI4* eventer NZB Campino and grand prix dressage horses Chagall, Chopin, Catch You and Amichelli are all Contendro sons. Codex One and NZB Campino both competed at the Olympics in showjumping and eventing respectively.  In 2012, his daughter, Corona won the 5-year-old Bundeschampionat, while Hello Annie has won almost €120,000 on the GCT tour.

Damline -  Grand dam Polarbraut is from Zeus and jumped at 1.40m. Great-grand dam Preciosa is a daughter of the full bred Anglo Arabian stallion Inschallah and the Shagya mare Pamina. The dam of Czardas, Grannina also produced Priamus Z, who Vincent Voorn competed for years at the highest level. Grannina also brought a 1.60m horse from Chacco Blue and a 1.45m horse from Stakkato.