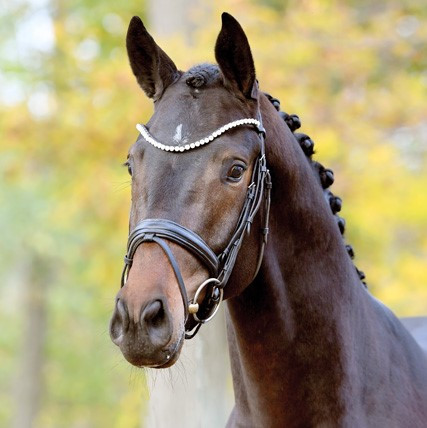 About & Performance -  The new upcoming stallion Dameron holds a highly interesting bloodline with the high quality Trakehner sire Helium. He has a top quality self carriage and a good type, his movement is equally as impressive as his conformation with a dreamy trot he holds the attention of any audience.

Sire - Helium finished his 14-day performance test in Schlickau as top stallion, with a final score of 8.58, an overall dressage score of 8.24, 8.50 points for the jumping overall score. In 2017, Helium was successful in young horse tests and dressage horse tests. His first year of foals was outstanding, at the auction in Medingen his four foals reached an average price of more than 20,000 Euros. In 2018 Helium was highly scored on rideability in the second part of the sports exam and won several dressage tests.

Damline - His dam Donaubluete was champion mare of Lower Saxony-Hanover in 2009. The same year she was awarded best half blood mare at the Trakehner Hengstmarkt. Second dam Donaumärchen is full sister to Damaschino's grandmother, both mares belong to German National Horse Champion Family in 1994. The same family provided the stallions Donautanz, Donaugold, Donaumonarch and Donauprints.