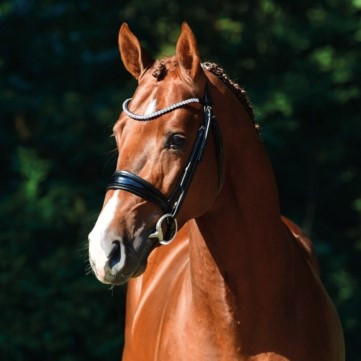 About & Performance - Diablue is a horse who has an outstanding technique and conformation as well as phenomenal ability with extremely fast reflexes, securing Diablue's a place in the premium ring at his licensing in Redefin. A real show-jumping champion is maturing, in whom we have high hopes for the future. Diablue PS is the first licensed son of the double German Champion Diaron, who is still in the fast lane in sport and was placed with Patrick Stühlmeyer in the Youngster Tours of Verden/GER, Neumünster/GER, Zandhoven/BEL and Opglabbeek/BEL. And he almost succeeded in winning a third title at the German Championships.

Sire - Diaron almost succeeded in winning a third title at the German Championships, after being placed second in the qualifier, he accessed the seven-year-old final, but had to settle for eighth place due to the only fault of all his rounds there. In the 40-year history of the German Championships for young show-jumping horses, Diaron OLD has secured the record of a stallion winning double gold, which has only ever been achieved twice. After winning the five-year-old class in 2017, the modern show-jumper also won the title in the six-year-olds in 2018. Furthermore, Diaron has received the OLD designation, which is awarded by the Oldenburg Verband to the best Oldenburg bred horses.

Damline - His dam Stakkariella, sold for 2.4 million euros at the P.S.I. auction to customers in the USA in 2017, won numerous intermediate (M) level competitions for young horses with Patrick Stühlmeyer, competed successfully at the World Championships for young horses in Lanaken/BEL and was placed at the 2019 German Championships in Warendorf. She is the full sister of the internationally successful Stariallo Blue PS/Irma Karlsson/SWE and of the show-jumping World Cup finalist Storiall Blue/Kara Chad/CAN, who was placed in the international Youngster Tour.