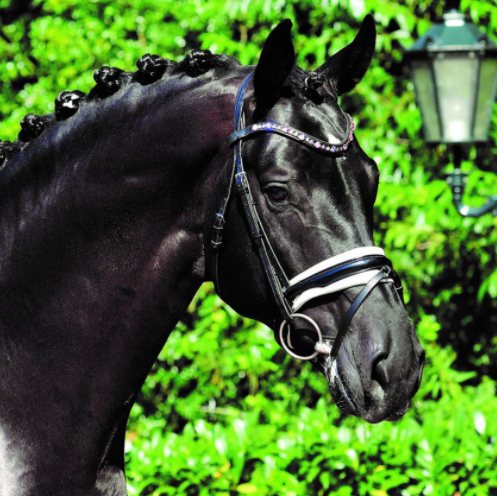 About and Performance- Donier is a wonderfully put together stallion, he shows expressive gaits and packs in a huge amount of charm. He finished his performance test in the top group receiving 9.0's across the board, with his top WBFSH ranked sire and his legendary damline this young stallion is destined for greatness.

Sire-  His sire De Niro was an outstanding stallion who's sporting career was exceptional, in 2001, he won the German Championships of Professional Riders with his rider Dolf-Dietram Keller. That following year he won international Grand Prix and Grand Prix Special dressage tests in Saumur and Berlin. His offspring are leading in his footsteps as in In 2007, De Niro's son Deveraux became World Champion of the six-year-old dressage horses in Verden. In 2008 De Niro was honoured by the Hanoverian Society with the title "Stallion of the Year". In 2009, De Niro provided two European Champions as wel as Dablino, the most successful Grand Prix newcomer. In 2011, the overall amount of prize value of De Niro's descendants reached more than 1,000,000 Euros.

Damline-  His dam Thery is a mare who has produced a number of successful sons, Donier's full brother Furst Toto  was the main premium winner and has been successful in sport following the commendation. His great grand dam Sunny Girl produced the licensed stallion Lord Schufro OLD (by L’Espoir), Regional Reserve Champion and placed twice at the German Championships.