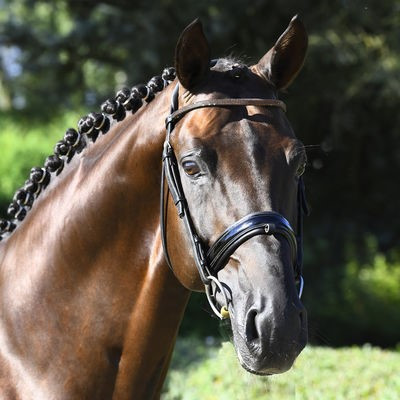 About & Performance -  Floricello expresses top quality movement in all three basic gaits. In 2010 he was reserve winner of the Oldenburg licensing. The following year he was runner-up at the junior championship in Sweden, where he passed his performance test in 2012. In Falsterbo he won the Scandinavian Open. In 2013 he was vice world champion of five-year-old dressage horses in Verden. Under Andreas Helgstrand he got dream scores of up to 9.8 for movement, rideability and perspective. In the meantime he has won advanced level dressage tests with Walter Wadenspanner and was able to place himself several times.

Sire -  Florencio was a Dutch ambassador for the best of German breeding. His outstanding paces earned him a score of 10 for his walk at his performance test, with a 9.2 for canter and a 9.5 for trot. Florencio's influence continues despite his death in May 2016; he is 5th on the WBFSH Sire Rankings(2020). He was the reserve champion at the 2003 Bundeschampionat. In 2004, Hans Peter Minderhoud took over the ride and caused a sensation when he won the World Young Horse Championships in Verden with a record score of 9.8. They won the Pavo Cup Finals a few weeks later and reclaimed the World Championship title the following year. Florencio competed internationally up to Inter I, but by then was already so in-demand as a stallion that he was then retired to focus on his busy breeding career.

Damline -  Damsire, Dormello was awarded the I b main premium of the Oldenburg Association in 2001. He sired six licensed sons in Germany and was successful in advanced level dressage tests. Feingau in the third generation was the stallion performance test reserve champion and delivered outstanding riding horses. The great grand dam Silke II delivered the stallions Weltsporn (PB Westf., NED) and Walentino (PB Oldbg.) With Weltmeister. The fourth generation of the Anglo-Arab gray stallion Inschallah AA was one of the most important sires in Germany and, after Ramzes AA, is probably the most important representative of his breed in warmblood breeding. Inschallah AA was inherited in a very versatile way, produced top horses for arena, course and military.

Progeny - The descendants of Floricello were able to showcase themselves in 2019 . The 5-year-old Danish gelding Fumiere was able to place 10th at the World Championships for young dressage horses in Ermelo. The 6 year old gelding Notting Hill Th won the Swedish SWB Trophy. The 3 year old gelding Fumeé M was able to shine at the Bundeschampionat, became Bavarian Riding Horse Champion and South German Vice Champion. The 3-year-old mare Maricella M reached the final ring at the state premium show in Munich-Riem, and his foal crop delivered many gold-awarded foals, including the top of the foal auction in Ising with 27,000 euros.