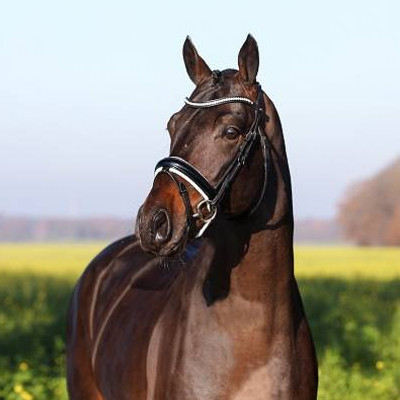 About- Galaxy is a modern dressage horse. With a great deal of nobility and elegance.. After successfully completing his 50-day stallion test in Schlieckau in 2019, he shone in 2020 with gala performances under the saddle of Simone Pearce. After a first-class first crop of foals with the Münster price peak "Ganz Große Kino" (dam's sire Samarant / hammer price 30,000 E), Galaxy was presented as the main premium winner in Vechta.

Sire- Father Grand Galaxy Win comes from the combination of the Grand Prix winning stallions Apache (E. Scholtens) and Jazz (K. Beckers). He was champion stallion in Denmark, placed as a five-year-old World Championship finalist in Ermelo and is currently victorious up to Intermediate II. The dam's sire Sir Sinclair is regarded as an excellent supplier of Grand Prix horses.

Damline-  His dam, produced Dionisos, a dressage horse that was successful in the international junior tour. His granddam produced Galandro (by Bon Bravour), a KWPN-licensed, St. Georg-winning stallion, and Fernando (by Westpoint), a medal winner at the Junior Dressage Championships in 2020. She is also the half-sister of the famous Exquis Nadine , who successfully represented the Dutch colors in the arena at championships under Hans-Peter Minderhoud. The third dam Charites is full sister of the Grand Prix winner Windsor. The licensed Dorado, who won bronze at the World Championships for five-year-old dressage horses in 2013, also came from the same branch of the Otrichta line.