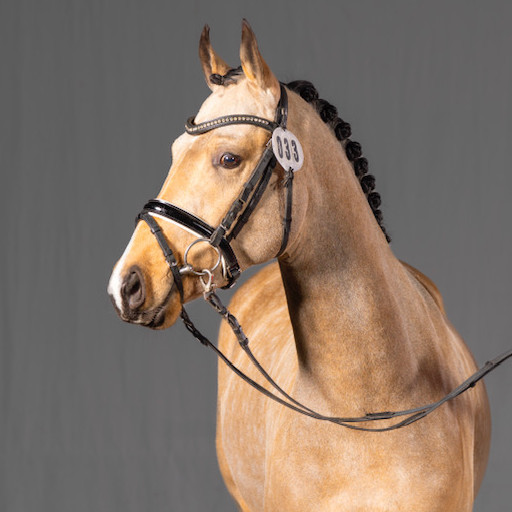 
Terms- 350 + VAT If the mare is certified not in foal by the end of September, you will have a 50% credit to use the following season on any stallion from the same stud. If the first AI of the season is 1st July or later, the credit is 100%.

About-  A very special treasure for pony breeding and sport. The characterful Grisu pleases the eye with his shapely, masculine appearance and demonstrates three first-class basic gaits as well as considerable jumping capability.

Sire-  His father, Golden Gray NRW, was second reserve champion of the Westphalian pony licensing in 2016. During the Westphalian Weeks in 2017 and 2018, he was Vice Westphalian Champion and at the Bundeschampionat of the same years, Golden Gray was Vice Champion in the stallion classes. In the meantime he has won tests for dressage horses and was also placed in the 2020 Bundeschampionat. Seven sons from the first crop received a positive licensing verdict.

Dam-  The dam Ghala WE, descended from the medium dressage winner Davenport II, was successful in riding pony tests several times and has already delivered another licensed son by A New Star I and three successful tournament ponies. The grandmother also produced three sport ponies and her father was the epoch-defining sire Brillant, who produced 34 licensed sons and international top ponies in dressage and show jumping