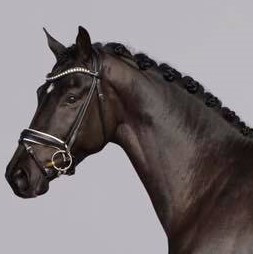 About & Performance - Iron is an extremely expressive and promising young stallion, who was selected for the Danish Warmblood Stallion Licensing in Herning 2020. Even as a foal he was impressive, as he was awarded highly by the German Oldenburg Federation. He charms everyone with his style and great movements, his flexible and explosive gaits, which shows a lot of promise for the future. Iron is from the first year of offspring by Ibiza, who represents the Dutch Vivaldi and Jazz blood.

In 2020 Iron was reserve champion of his performance test with the impressive score of 894.5.

Sire - In 2017, Ibiza scored 8.73 in his 3-days sports test in München-Handorf, and in 2018, he was placed 6th at the WCYH in Ermelo. He is currently being trained by Emilie Scholtens and is heading towards the PAVO Cup and hopefully the World Young Horse Championships. His first crop of offspring are making their mark in the licensing shows across the country and by 2020 he had 12 licensed sons which was a remarkable result.

Damline - Havanna is the premium state mare, by the stallion Hohenstein, who won his licensing in Adelsheidsdorf in 1994. Havanna is also the dam of the Don Schufro offspring, Donna Eden, who also was awarded premium state mare, won the German Hannover Championship for 3-year-old mares, and was selected for Herwart von Decken-Schau.is the 9th premium state mare in the dam-line, and the line has also brought the licensed stallions His Highlight, Graf Goetz, Woerlin, Walter Scott, and Landsieger I + II, along with several great competition horses.