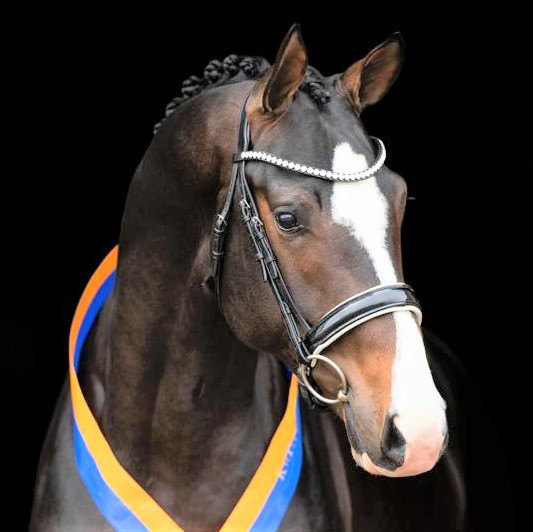 
Terms - €1000 + VAT for up to three attempts with frozen semen on one named mare in one breeding season, if the mare is certified not in foal by the end of the September a 50% credit will be applied for the following year.

About & Performance - The young stallion Mansion was one of the public's favorites and was easily appointed for the performance test. He also obtained the title 'premium stallion', which is reserved for the most complete stallions of the year. Mansion won over the stallion inspection committee and the enthusiastic public with his charisma, self-carriage, suppleness and excellent movement.

Sire -  Totilas was the first horse in history to break the 90% barrier, scoring 90.7% to take home individual and team gold at the 2009 Windsor Europeans. He followed this up with three gold medals at the 2010 Kentucky World Equestrian Games, having also scored 92.3% at Olympia 2009 to set a record that would stand for four years. In 27 appearances at international grand prix with Edward Gal, Totilas scored over 80% on 24 occasions. The pair won three World Cup qualifiers and then the World Cup Final as 's-Hertogenbosch on a score of 89.8%. Under Matthias Rath, Totilas was part of the silver medal-winning team at thr 2011 Rotterdam Europeans and finished fourth individually. On his only appearances against Valegro (at Aachen 2014), Totilas was the undeniable victor; winning both the grand prix and the grand prix special on 82% and 84%.

Damline - The Elite mare Unassion has produced internationally successful offspring in sport such as PSG mare Ambission (Sunny Boy), and multiple Elite mares Primeval Brittsion (Sir Donnerhall I), Fashion (Belissimo M), Hinvasion (Connaisseur). Her sire Krack C was champion of the Pavo Cup in 1996 and 1997, and at his stallion performance test in Ermelo, he achieved very high marks for his rideability, which he has passed on to his son and grandsons.. Krack C won several grands prix with Anky van Grunsven and participated in the World Equestrian Games in Jerez in 2002.