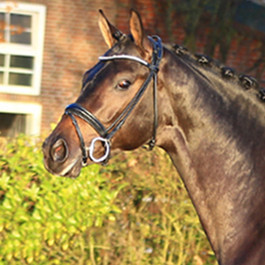 About & Performance - Moreno is an Oldenburg premium stallion and was shown to be a favourite at the licensing show, he won over the viewers with his beautiful type and showing off his outstanding gaits. Conformationally he has very good mechanics and puts this into good use with his endless powerful performances. He is by Morricone I and San Amour I who has already produced numerous Grand Prix horses. In 2020, Moreno made his debut in Höven and it couldn't have been better. He showed himself confidently and won the rididen horse class with the final score of 8.8. For the trot and canter as well as the training and the conformation he received the dream mark of 9.0.

Sire- Morricone I is the 2014 Oldenburg champion stallion and dressage winner at his stallion performance test in 2015 and the main 2016 premium winner. In 2019 he made the latest debut in the advanced (S*) class, finishing with a final result of 72 percent, he was up against a strong group of competitors in the Yougster Tour of the K+K Cup in Münster and finished with fourth place as best seven-year old horse.

Damline- His dam sire is another well accomplished stallion, San Amour who has had a well established career back in 2007 with rider Hubert Bourdy representing France. The two achieved 9th place in the Gold League, Lanaken 2006, 5th place Grand Prix, Brussels 2006, 1st place performance stallions in France with the highest ever BLUP. In the Brilliant Ring at the 2011 Oldenburg licensing, four of the top six mares were by San Amour. His oldest offsping are now emerging at small tour level, among them the three licensed stallions Sinclair Jason, Sandbrink, and Solo Feliz. He has more than 30 licensed sons, including the very popluar Santo Domingo. San Amour I passes on his type and temperament to his offspring, and is ideal for those wanting to improve the rideability of their mares. He has several offspring at grand prix including West Side Story, Sinclair Jason, and Sandro D'Amour.

Progeny - Moreno was a very successful young sire to his first crop of foals. These foals were described as very sporty, handsome with tremendous drive and dynamic. In his first year, 15 of his foals were shown and all of them received an award, five of which were selected as Elite Foals.