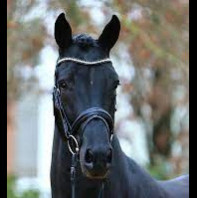 About - This young stallion makes an impression with those who see him due to his striking appearance, with a black coat and muscular type he catches the eye when performing. Vagabond is very balanced in all three paces and holds himself well, combining this with his work ethic proves him to be a promising sire for the future. At his licensing he jumped all the fences with ease and flawless technique with a total score 8.69, 9.0 for scope, 8.2 for canter and 8.6 for technique, and 8.5 for general impression.

Performance -The young stallion by Vagabond de la Pomme was licensed at the 2017 Oldenburg stallion-days, making him the first son of Vagabond de la Pomme licensed in Germany. In 2018, Vagabond passed his 14-day-test at Adelheidsdorf.  In February 2019, Vagabond passed his sport test (FN) successfully, with a overall score of 8.69. He earned a 9.0 for scope and rideability, 8.2 for the canter, 8.6 for the technique and 8.5. for the general impression. In April 2019, Vagabond entered his very first show. The beautiful black stallion did an amazing job and acted like an old professional, ending the competition as runner-up. He entered his second show with the same enthusiasm and convinced the judges, who placed him in the youngster jumping class at A**-level.

In 2020, Vagabond was placed in the youngster jumping classes in M-level and qualified for the Bundeschampionat in Warendorf. Due to his Dutch passport he was not allowed to take part in Warendorf but he fulfilled the necessary requirements for the final registration in the "Stallion Book I". In 2021, Vagabond won both youngster classes as well as jumping classes on L-level and placed up to M**-level.

Sire-  Vagabond de la Pomme was an international superstar, being one of the most competitive grand prix jumpers on the circuit. His results include second and eighth in the World Cup Final (Las Vegas 2015, Gothenburg 2016), third in the Paris and Chantilly GCT Grands Prix, first and second in the Antwerp 1.55m GCT (2014 and 2015), eighth in the Stuttgart and Bordeaux World Cup qualifiers, and 7th in the World Cup qualifier in Zurich already in the 2017 season. He has so far won €470,000 in prize money.

Progeny -  The first foals by Vagabond are described to have correct confirmation, modern outlines and type.